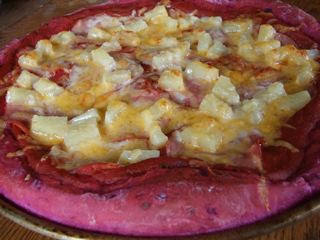 . . . until now. I've even eaten it, and it's delicious.
It all started when I bought some beets at the farmers market. I had wanted to buy spinach to make spanakopita, but you can only buy what's there, of course. So I took home beets, wondering what to use them for.
You can roast them, you can put them in soup, you can stir-fry them with potatoes and make red flannel hash. But then I remembered an Idaho blogger who used beets in pizza dough. Her photo is way better than mine, so be sure to go there and be truly in awe.
This dough is lovely to work with, very soft and pliable. The recipe makes two 12-inch pizzas, so I've saved the second bit of dough to play with another day. Purple calzone, anyone? 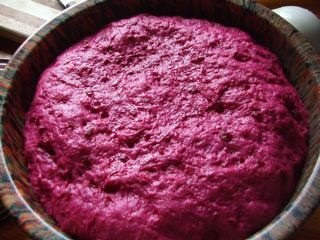 purple dough is a-risin'
If you don't have a mixer, you can make this pizza dough by hand. To replace steps 3 and 4, put all ingredients in a large bowl, mix until blended, then put dough on a lightly floured surface; I used a pastry cloth. I had no trouble with stains, but you do want to be careful since beets can stain some surfaces. Knead until dough is satiny, about 8 minutes, and pat into a ball shape. Then go on to step 5.
To cook the beets, I washed them thoroughly, trimmed off the leaves, leaving about 2-inch stems, wrapped them in foil, and baked them in a 400-degree oven for about 40 minutes. I was cooking something else, so this worked well. You can also cook them in the microwave, I suppose (I don't have one), steam them, or even use canned beets.
For the puree, I used a blender, so bits of beet were still evident. If you are cooking for a child, I'd recommend using a food processor (or smash blended beets through a strainer) to get a good smooth puree.
You don't taste the beets in the crust, so this is perfect for children. The taste of the sauce really comes through more than anything, especially if you make it with fresh herbs; I used some power-packing basil from my garden.
Be sure to go to the notes at the end of the original recipe and make the sauce. You don't cook it, which is a great timesaver. Also check out the grilling tips in another note. I used a pizza pan with sides, but it probably would have been much better on a pizza stone.
I did use pineapple bits and some Tillamook cheese, but the Canadian bacon is from a local national-award-winning meat processor. The flour, of course, is Wheat Montana. So considering I wasn't really trying (I was simply craving a pineapple-bacon pizza), I didn't do too badly eating Montana-made products today.
Note: I advise you to eat anything made with this dough within 24 hours or so. After that it turns a rather unappetizing brown color. It still tastes OK, but it's not that pretty purple you started out with.
Labels: beets, pizza, recipes

Find a complete list of Montana farmers markets at yummymontana.com.
We are blessed by being surrounded by so many good things right here in Montana. I get really excited seeing everything that is produced in Montana -- I hope you do, too.
In this blog, I describe my adventures as I search throughout Montana for the people who make food and the places where we can buy it.
During the summer of 2009 I traveled over 8,000 miles to visit every farmers market in Montana. What a trip! I plan on more market travels. Stay tuned.